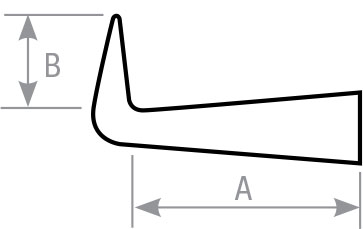 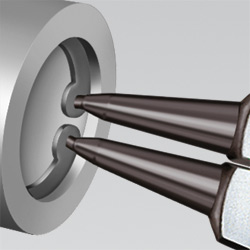 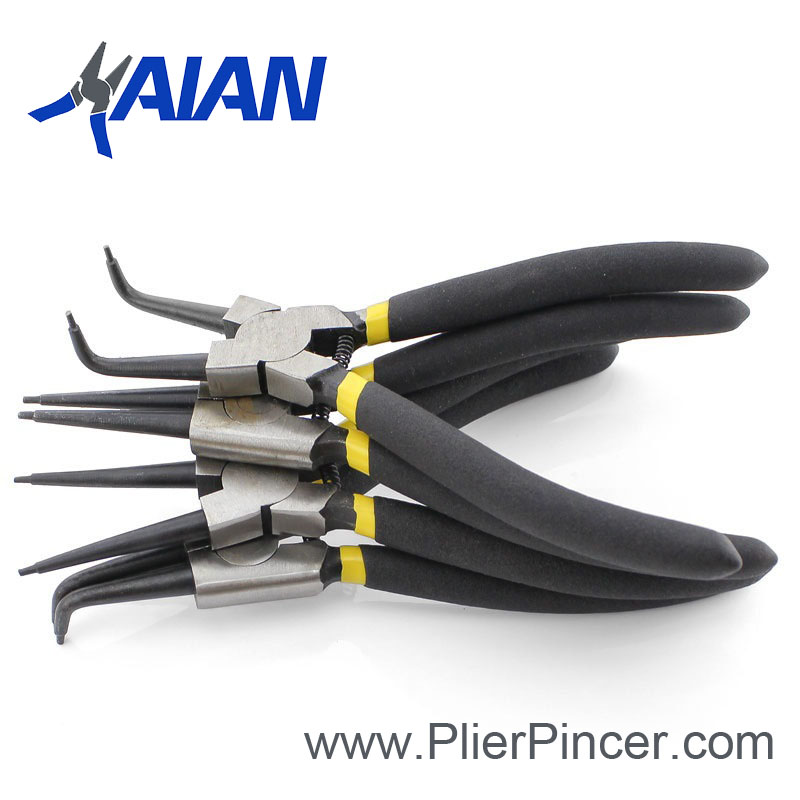 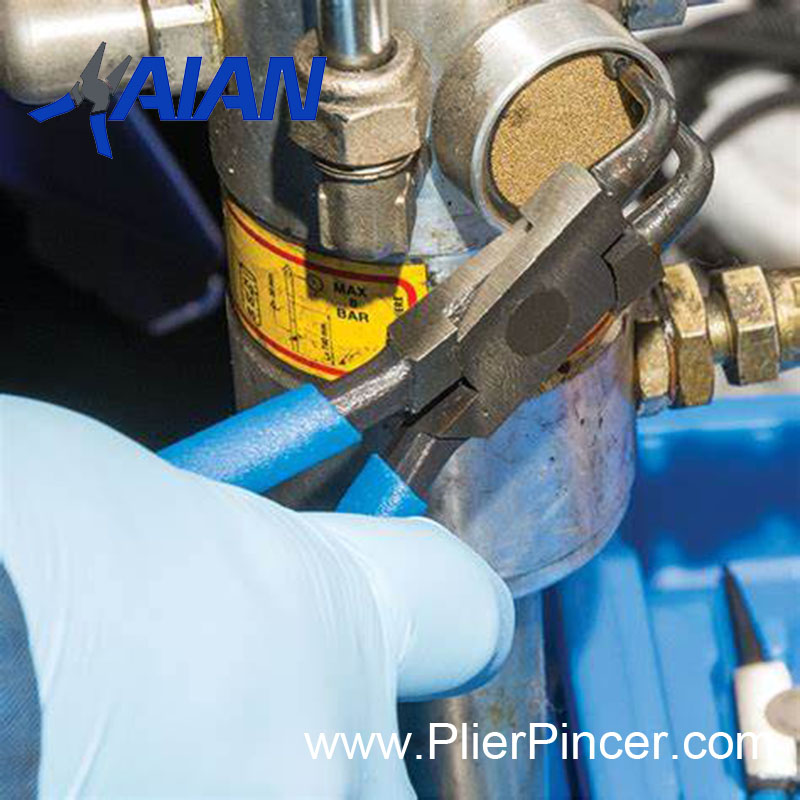 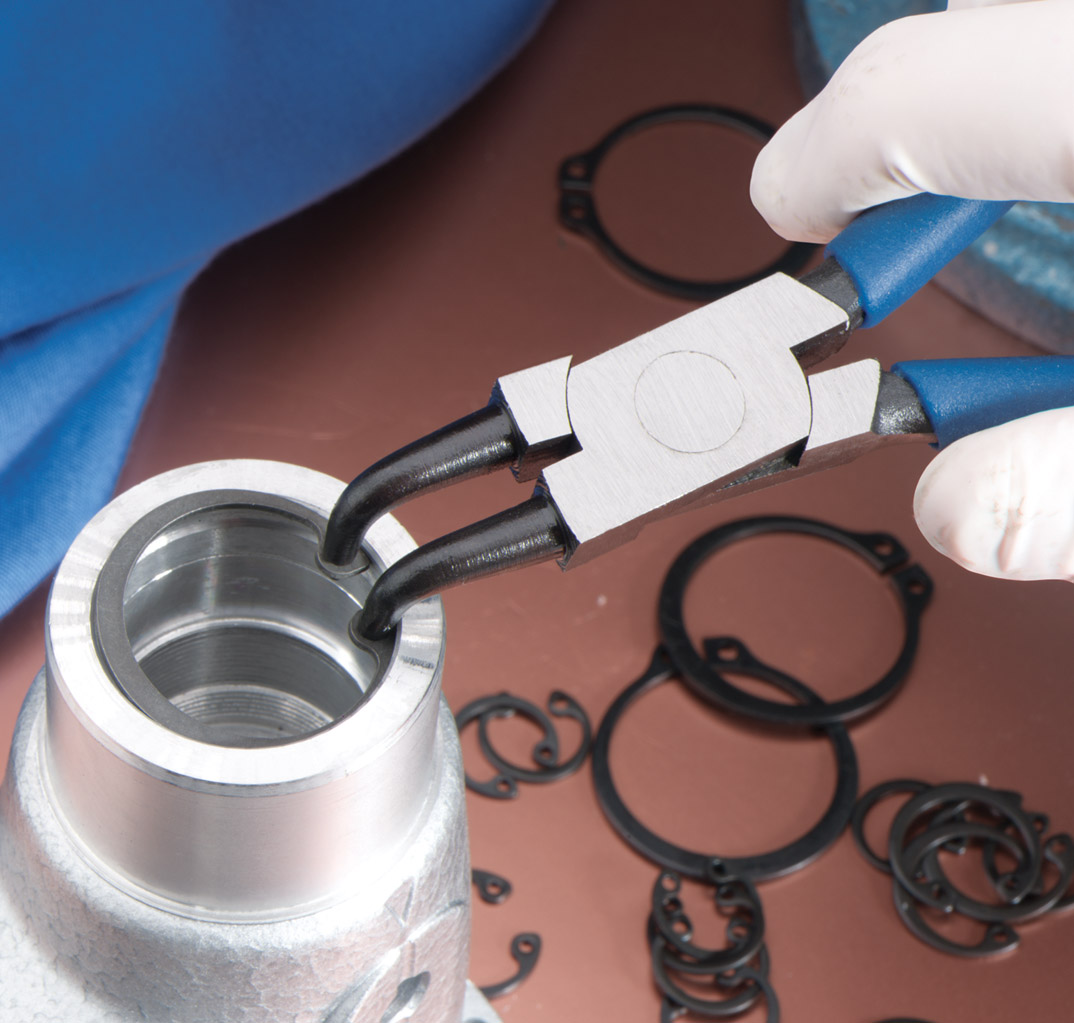 Snap Ring pliers (or Circlip Pliers or Retaining Ring Pliers) are a tool designed to install and remove snap rings, which are small metal rings that hold in a bearing or other assembly item by setting into a machined groove. Snap rings are common in car engine parts as well as in motorcycle and bicycle shocks and forks. While the snap-ring pliers are not a tool that will be used often, they are an important addition to a tool box because a snap ring is difficult or impossible to remove or install without them.

The tool itself looks like a regular set of pliers in a lot of ways. Snap-ring pliers have two arms that act as handles, and they are attached at a pivot point near the head of the tool. Snap-ring pliers have two arms at the tip: these small arms are bent at a ninety degree angle and each one features a small, round tip that will fit into the small, round holes on the snap ring. The snap-ring pliers are sometimes spring-loaded to aid in retracting the tool, and most snap-ring pliers feature a reversible head so the pliers can either pull on the snap ring in one position or push it outward in another position.

How to Use Snap Ring Pliers / Circlip Pliers

Snap ring pliers (or circlip pliers or retaining ring pliers) are used to install or remove “circlips” from equipment shafts. A circlip, sometimes called a snap or retaining ring, holds bearings on shafts or within bore holes. Circlips are also used to hold wheels on axles, clutches on chainsaw motors and even faucet cartridges in valve housings. Like circlips, the pliers you use to install and remove them come in multiple sizes, but there just two configurations. Use the proper circlip pliers to simplify the task of removing a ring from a shaft or bore hole.

Identify the circlip. Circlips come in two configurations. Internal circlip rings go inside a bore hole and apply pressure to the outside when in place. External rings go around a shaft and apply pressure inward under normal use. The two holes on the circlip can be used to identify the type of ring. Internal circlip rings have the hole inside the perimeter of the circle made by the clip to keep them out of the way of the ring when it is in place. External rings have the holes outside the perimeter of the circle that will go around the shaft.

Install an exterior circlip by hooking the ends of the pliers to the loops on either end of the ring and opening the jaws of the pliers. Slide the ring into position, release the handle and remove the pliers.

Place an interior circlip by hooking the jaws on the circlip ring and closing them to compress the ring. Slip the ring into position inside a pipe or fitting, allow the jaws to open and remove the pliers.